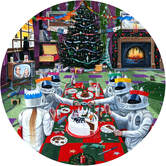 Local Artist Andy Kitson's latest venture - 'Cats in Space' are a band formed in 2015 in a classic rock style, with quite a pedigree. Their members who are based in the South have been in groups such as T'Pau, 10cc, Bad Company, The Sweet, Ian Gillan Band, Robin Trower and Asia. I have known their guitarist, song writer and founder Greg Hart since 2002. He is an artist too and he asked if I would like to paint their album covers, released on vinyl as well as CD and to download. So far I have painted covers for their albums 'Scarecrow' (2017), 'Daytrip to Narnia'(2019) and a Christmas painting for their new single out Dec 6th 'My Kind of Christmas'. The painting has been used for a 12in picture disc vinyl, depicting a 1970s Christmas of old, with Eric & Ernie on the TV, Subbuteo and a train set. Cats in Space are playing at Epic Studios in Norwich on Wednesday December 18th on their Narnia Christmas tour!
Perhaps some readers would like to come and check them out, supported by the Rebecca Downes band.
Here is the 'My Kind of Christmas' song video
https://www.youtube.com/watch?v=I3PsPK0xrg8
And here a video of my Cats in Space gallery at one of their concerts:
https://www.youtube.com/watch?v=o1p8y0JuBCk

Thanks to many hours of voluntary work in the evenings by local artist Andrew Kitson the children of Mulbarton now have a view of the seaside in place of the unsightly block wall that creates the barbecue outside the Village Hall and Social Club in the children's play area.

Andrew Kitson said
"Our village hall and social club in Mulbarton has a children's play area alongside the adjoining social club. For years it has had an unloved breeze block brick BBQ, used quite often in the summer but an absolute eyesore...so I brightened it up a bit for the kids that use the park."

Many thanks Andrew, I hope you've signed the wall !

See the Before and After Pictures Below